Squid Games is the most popular show on Netflix and offers many options for this season regarding costumes for kids and adults. The show that is sweeping the nation takes a hard look at what a person would be willing to do for money in the event they had hit rock bottom. Would you be willing to put your life on the line to have a chance at making a fortune? Not my cup of tea but it explores the option and the journey of individuals who have essentially nothing that explore just that.

We have selected the top five options for Halloween 2021. These are sure to go fast. Act quickly and join the games this Halloween. 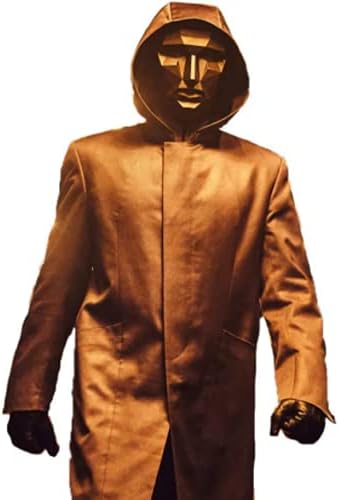 The Frontman is the top guy in squid games and poses a menacing look that is sure to get attention of any Halloween goer. You are sure to turn heads in this Squid Game Costume.

#2 Squid Game Milita - Which one will you pick?

The squid game squad is a collection of militia that execute and control the games. Each shape is a rank in the militia.

Circle wearing workers are the lowest ranking, they must answer to their superiors and can "only speak when spoken to".

Triangles are placed on the middle rung of the Squid Game hierarchy – they act as armed soldiers.

Squares are effectively the bosses within the worker's group, they keep their fellow triangles and circles in check and call the shots. The jumpsuits are the players in the games. These players are denoted by a number on the jumpsuit. Are you ready to play the games for Halloween? Which number will you choose? The VIP's are the funding sources for the games. They bet on the winner and fund the games in general. The are the money behind the games. So rich and board they pay to watch people put their lives on the line for money. With not much time left until Halloween these costumes and masks are sure to go quickly. Hurry while supplies last!

Other costumes and accessories are available for Squid Game Fans. Check them out here!